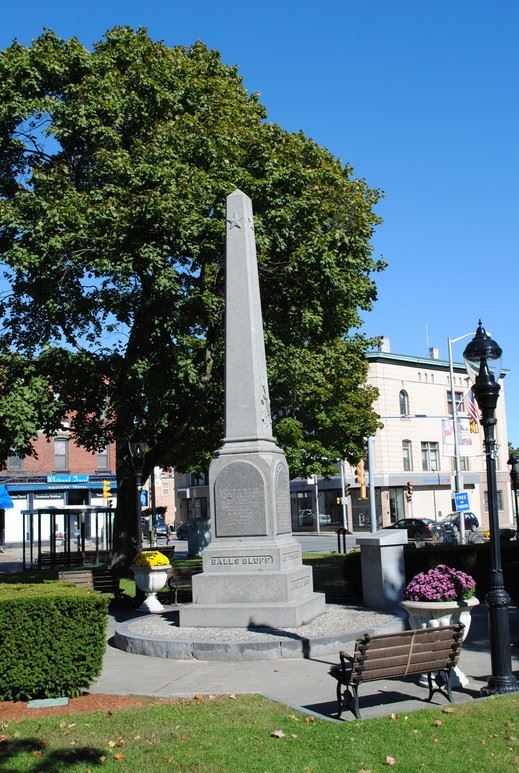 To the earnest and persistent efforts of the late James Bennett, Esq., in searching for information, we are indebted for the following facts in connection with each of the forty-eight soldiers whose names are inscribed on the Soldiers' Monument.

Corporal Andrew W Cowdrey, the first martyr from Leominster, was severely wounded at Ball's Bluff, October 21st, and died of his wounds, November 3rd, 1861, at Poolesville Hospital, Maryland shore. He left a wife and two children, and was buried in Leominster with military honors.

George H. Gallup, son of James B. Gallup, was taken sick with typhoid fever at Savage Station, left behind at Chickahominy, taken prisoner by the rebels, and confined in Libby Prison. With only the floor for his bed, he received neither care nor medicine for twenty-seven days. When exchanged he was in a weak and reduced condition, and had an attack of diphtheria, and died of suffocation from falling into a foul vault at the hospital, Fortress Monroe, August 6th, 1862.

Corporal Franklin Gardner was one of the "color guard," and at the battle of Antietam, September 17th, took up the colors from the third color bearer, who had been shot dead at his side. He received three balls; the first passed through a limb, the second through his thigh, the third in his stomach. Regardless of these wounds, he managed to keep the flag waving until the next guard took it. From Wednesday morning, September 17th, until Friday morning of the same week, he lay within enemy lines. When our men went to bury the dead and remove the wounded, he was placed in the hospital at Sharpsburg, and removed September 25th, to the Patent Office hospital, where he died October 6th, 1862.

Capt. Hans Peter Jorgensen, a native of Copenhagen, Denmark, enlisted as Orderly Sergeant. At Ball's Bluff he was wounded in the right arm. He was detailed to recruit, but afterwards promoted to Second Lieutenant, First Lieutenant, and October 28th, 1862, to Captain, in command of his old Company A, and was killed. Capt. Jorgensen had been in service in the campaigns of the Danish Army and was twice wounded while fighting the Prussians at Schleswig and Holstein; once in the arm by a ball and on the head by a sabre. "He was not a native of this country. He could not have been drafted, yet so keen was his appreciation of the great interests at stake, that he is reported in the Worcester Spy to have said: 'Freedom is the same everywhere and I cheerfully give my life in its defense. I would give more if I had it,' or words to that effect."

Corporal Charles A. Lamb, son of Albert Lamb, was taken prisoner at Ball's Bluff. At Libby Prison he sickened and died of congestion of the lungs, November 25th, 1861.

Sergeant Edward B. Rollins, after fighting bravely at Ball's Bluff, succeeded in crossing the river safely, but on looking back to the Virginia shore he saw some of his comrades, who were not yet taken prisoners. He procured a skiff, rowed it over amid the whistling of balls, took in his passengers, and landed them in safety. Two years later, he sent his wife a beautifully wrought card with the names of the eleven hard fought battles in which he had been engaged. He left space for one more, and wrote, that after one more battle, he should probably come home. He went into his twelfth battle, Gettysburg, and was killed July 2d, 1863. He left a wife and four small children.

Capt. Charles H. Stevens enlisted as Fourth Sergeant. He was promoted 2d Lieutenant, 1st Lieutenant, and, July 4th, 1863, to Captain. He was wounded in the foot at Savage Station, and in the leg, while supporting our batteries at Gettysburg. At Bristow Station, October 15th, 1863, after an hour's hard fighting, the enemy gave away; but Capt. Stevens was severely wounded, and died while being carried to the hospital. In his honor Post 53, G. A. R., was named.

John Gould Snow, only son of Thomas S Snow, was at Ball's Bluff and in six other battles. He dies of chronic diarrhea, December 10, 1863, at Fairfax hospital, Va.

Sergeant John Q. A. Tripp was in seventeen battles. He was wounded at Gettysburg, captured at Petersburg, taken to Andersonville, paroled, entered our lines exhausted by starvation, cold, and sickness, and died in a Baltimore hospital, March 19th, 1864. He was buried with military honors at Leominster, March 23d, 1864.

Sergeant George E Wilder, son of George Wilder, was shot in the head at the battle near Spottsylvania, and died May 17th, 1864.

Charles B. Wood was drowned March 20th, 1862, while relieving guard on a dark, stormy night, on the banks of the Chesapeake and Ohio canal.

William L. Whitney, private, died of fever at the hospital in Washington.

Rufus H. Carter, 21st Reg., Co. D, was mustered out at Blaine's Cross Roads, East Tennessee, December 31, 1863. He re-enlisted in the Veteran Volunteers and was killed at Petersburg, Va, by Sharpshooters, September 30, 1864.

John F. Crosby, 23d Reg., Co. D, was wounded by the enemy at the battle of Kingston, and afterwards was shot in the back by accidental discharge of a musket in the hands of a comrade. He was helped to an ambulance and was four weeks in the hospital at Newbern. He was sent north by steamer, but died in New York Harbor, April 22, 1865. He was buried in Leominster with military honors.

Frank George, 3d Reg., Mass. Cavalry, Co. D, was taken prisoner in the Shenandoah Valley, with his entire Company, captured by two companies of rebels in United States uniforms and carrying the Union Flag. They stripped them of their clothing and marched them on foot 5 days without rations. He was first imprisoned at Belle Isle, then at Andersonville, and afterwards hurried away to Salisbury, upon the approach of Sherman's army, where he died of starvation, December 6, 1864. He left a family.

George A. Houghton, 21st Reg., Co. I., died of ship-fever at Hatteras Inlet, on board the transport ship "Northerner," January 20, 1862. He was buried in the sand on the beach by chaplain, Geo. S Ball, and a band of sailors who volunteered to go ashore in a violent gale.

Henry K. Derby, had not been assigned to Reg. and Co., when he was taken sick at Fort Warren. He came home on a furlough, and died of Pneumonia at his father's home, Henry Derby's, January 5th, 1862.

Sergeant LeRoy R. Gallup, 36th Reg., Co. A, was killed by the premature bursting of one of our own shells while lying in front of and supporting our batteries at Campbell's Station, near Knoxville, Tenn. He left a wife and two children.

John F. Owens, 5th Reg., Co. E, died of diphtheria, in camp, at Readville, April 13, 1865. He was buried in Leominster, with military honors. The Sons of Temperance, of which order he was a member, joined the service.

Albert Lafayette Wilder, 3d Reg., Co. D, (Cavalry), was taken prisoner at the same time and place, and under the same circumstances as his brother-in-law, Frank George. He weighed 180 pounds when taken; died of starvation about the time Frank George died.

Ira B. Foster, 53d Reg., Co. C, was wounded in the neck, near Port Hudson. He went to the rear and had his wound bound with cotton to stop the flow of blood. As it was early in the morning, he returned and fought the rest of the day, which was his last day's service. He was sent to Baton Rouge Hospital, where he died. He left a wife and child.

Sergeant James Mumford Lewis, fife major 53d Reg., Co. C, came home sick and died at home before he was mustered out of service. He left a wife.